Over the past few years, Indians have significantly consolidated their presence at the global stage, especially pertaining to the MICE industry. Most recently we had released the news about Mr. V. Anbu being elected as the President of UFI for 2020-21 and now we are breaking the news that Mr. Ravinder Sethi has been elected as the Chairman of The Committee of IELA.

Better known by its acronym IELA, International Exhibition Logistics Association has been a pioneer association in the international exhibition sector. Formally established in March 1985 as the International Exhibition Logistics Associates, it has covered a long way since then. Apart from a myriad of other functions, it mainly provides a forum for those people and companies that are engaged in the international transportation of exhibition material. Besides this, it aims to establish standards of performance for contractors involved in the physical movement of material to and from an exhibition site, as well as for contractors providing customs clearance, lifting, handling, trucking and storage services on-site.  Further, it also aims to establish a general database, provide information to the new-entrants of the industry and also to provide formal liaison between those involved in the transportation of exhibits and associated industries.

Since the Barcelona edition,2012, The Committee remains as a three-member body. Last year, Mr. Markus Eichenberger, BTG Suisse Ltd., Switzerland, was re-elected to The Committee. The first meeting of the committee took place the same day of the elections and Mr. Ravinder Sethi from India was elected as its Chairperson.

The committee is a 3-member body in the IELA’s governing council, elected directly by its members. The committee is entrusted to ensure that the Board of Management is functioning in accordance with its scope entrusted by the Articles and Statutes of IELA. The committee derives its existence from Article 9 of Chapter III which deals with the governing bodies of the association, in the statute of IELA.

The election of Mr. Ravinder Sethi as the Chairman of The Committee of the IELA marks a proud moment for India. Speaking to Exhibition Showcase, Mr. Sethi said- “The founding fathers of IELA were very wise in creating checks & balances in the governing bodies. It is in their wisdom that The Committee (earlier known as the Legal Board) was created. The existing governing bodies and functional working groups of IELA are brilliant. The Committee has an extremely responsible role in ensuring that everything remains like this.  I have had a great journey in IELA. From a simple member to committee member, to chairing committees, to be on the Board, become Chairman (15 years back), and then come back on the Board four years back has been a memorable experience. To be elected Chairman of The Committee is now the ultimate honor.  And to have Greg and Markus as fellow members is an even greater honor.  I am truly humbled by the faith and confidence that IELA has bestowed on me.”

Informa Markets in India Introduces its Initiative ‘Festivity of Business... 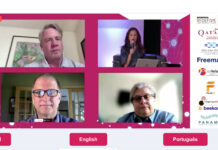 UFI LatAm Conference brings industry leaders from across the region together...

Focus on sustainability in events